The Bali bombers have been able to tell the world that they have no regrets over the 2002 Bali bombings that killed 202 people, including 88 Australians. These convicted terrorists are out of jail at presently during the religious holidays, a step only the Indonesian authoritis can explain. Amrozi – who played a lead role in the bombings – bravely announced that he would carry out another bombing if given the chance. Amrozi threatened retribution – and further bombings – should he and his two convicted bombers –the so-called smiling assassins – be executed for their crimes. His comments coincided with ceremonies to mark the third anniversary of the second Bali bombings in 2005 that killed 20 people.

Amrozi remained defiant this week as he and his co-accused – his brother Mukhlas and Imam Samudra – were allowed out of their cells at their island prison off Central Java to mark the Islamic holiday Eid el Fatr.

Mukhlas added, “The followers will take revenge actions, other warriors. If anyone kills us then there will be a (sic) revenge from all over the place.” 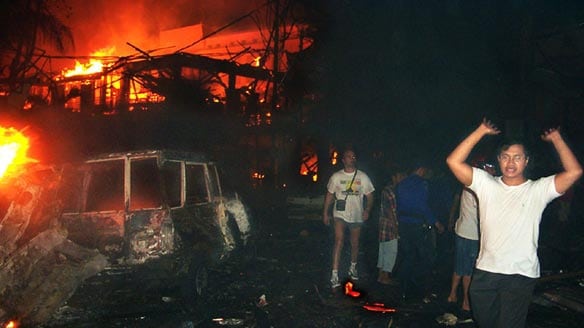 The Jakarta Post reports that assistant attorney general for general crimes Abdul Hakim said the decision was made to allow the convicts to experience what would be their last Ramadan.

According to Islam, during the holy month Muslims must not eat or drink between dawn and dusk for 29 or 30 days.

Many Islamic teachings believe the act purifies Muslims of all their sins.

“It has been postponed so as to avoid excesses,” Hakim said.

The execution, he said, would be carried out after Ramadan ends on September 30.

Earlier, Attorney General Hendarman Supandji set a deadline for the executions to be carried out before the start of Ramadan on Sept. 1.

Indonesia’s tourism bosses might want to have a word in the ear of prison authorities to tell them that allowing the bombers to preach hate and retribution outside their prison cells does nothing to help tourism to Bali.

There are still many who fear visiting Bali in case they get caught up in another deadly bomb attack. The latest outburst from the Bali bombers will only have increased those fears. An online poll conducted by the Australian family travel magazine ‘Out & About With Kids’ reveals 59 percent of readers think Bali is still unsafe, almost six years after the bombings which devastated the popular tourist haunt.