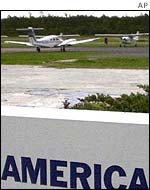 It seems that outcome of American School of Aviation affairs has encouraged the authorities at The North American Institute of Aviation flight school in Conway to close down its doors indefinitely Friday, giving notice to staff in their pay checks that their services would no longer be needed. I would rather look at it as a first aviation school who took the initiative of following the footsteps of Prince & Reny very boldly. Result is same like ASA, students and staff is clueless and school authorities is playing hide & Seek with Journalists and students.

Many stranded students have already enrolled into automotive schools all over country. As aviation school all over the country are finding it hard to continue their business, demand for automotive schools is growing by the day as automotive industry is unfazed by the global slowdown.

“This layoff will result in the cessation of most training and flight activities conducted by the Institute. It will not result in the closure of North American Institute of Aviation, Conway/Horry County Airport, or the delivery of fuel and maintenance services to aircraft based at Conway/Horry County Airport or to transient aircraft,” wrote president of the school, Benjamin Creel, in a release.

Creel and the school’s director of operations, Dan Flaherty, did not return phone calls for comment Monday.

Students at the school, many of whom are from foreign countries and living in the United States on student visas, were told Friday that the school would be ceasing its operations. Both foreign and domestic students were left wondering Monday if and when they would get their remaining tuition and expense money returned or it will be the same story like American School of Aviation of whose students are still fighting it out there.

Horry County spokeswoman Lisa Bourcier said the school’s lease at the county airport was not scheduled to run out until May 2009. The county is in the process of rebidding the lease on the airport property, which includes most of the hangar space, as well as the take off ramp. She said NAIA is eligible to rebid the lease.

Students sensed that there was something wrong when they were given credit cards to fuel the planes at other locations than the on-campus airport depot.

“Not too long ago they gave each of us a credit card to fill up the planes on fuel,” one of the student said. “Those cards filled up quickly and a few days before Friday, the school told us they were basically out of fuel.”

Instructors told foreign students that the school is trying to work out visa agreements to allow them to transfer to the Pelican Flight Training Center in Florida.

The American students are not part of that agreement.

Students were told they had 30 days to vacate the apartments on Airport Road in Conway, which are not owned by the school but are paid for through a contract between the realty company and the school on a monthly basis.

A search of Bankruptcy Court Records filed in the past six months showed that neither Creel nor NAIA had filed for bankruptcy. Creel also owns Creel Oil Co. and a distributor for Shell Oil.

Calls to the college and to staff to ask about whether student money would be refunded were not returned Monday.

Horry County police stationed two officers at the school through the weekend, in case of unrest from students.

North American Institute of Aviation first came into the news in year 2002 when one of their dropouts Kerim Sadok Chatty, a Tunisian was arrested with a gun in his carry-on luggage at the small Swedish airport of Vasteras near Stockholm on August 28, 2002 as he tried to board a Ryan Air flight to London’s Stansted Airport. He had flunked out of NAIA  in 1996. Chatty was later released after spending a one month in total isolation for lack of evidence.