How Swedish are you? A little bit, a lot or just so-so? We found the following on Facebook.com. You’ll probably recognize yourself in some of it 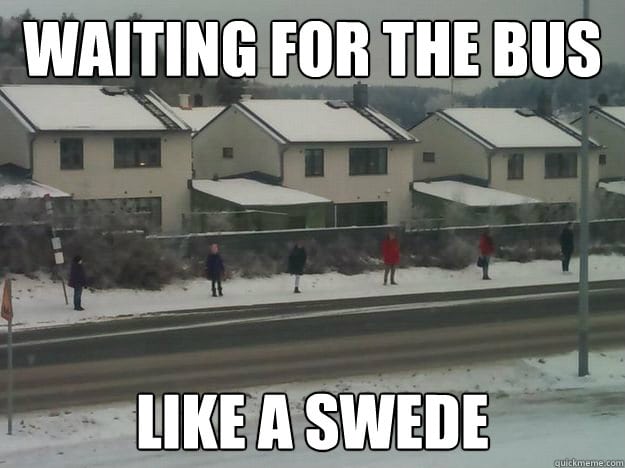 You know you are from Sweden when…
1. You thought Christmas was cancelled when Arne Weise retired.
2. You associate 3 pm on Christmas Eve with Donald Duck (and vice versa).
3. You get upset when Norwegians claim that the Peace Prize is much more famous than the other Nobel Prizes.
4. You associate Thursday with pea soup and pancakes.
5. You eat a minimum of ten buns with almond paste and whipped cream on “Fettisdagen” and claim that it just doesn’t taste right if the lid isn’t triangular.
6. You love complaining about Sweden when you are there and state “it’s much better in Sweden” when you are abroad.
7. You secretly love to pieces the Eurovision Song Contest.
8. You know at least 10 ABBA songs by heart.
9. You take your shoes off when entering a house, and don’t get why non-Swedes find that funny.
10. You take it as a personal insult when someone looks at you on the bus.
11. You’re used to sorting all your laundry into 30, 40 and 60 degree Celsius piles and become quite upset when you can only choose between ‘warm’ and ‘cold.’
12. You call yourself a Christian despite the fact that the only time you ever went to church was the last day of school in the summer.
13. You happily engage in a conversation about the weather.
14. You insist on convincing people that the Vikings were the first to discover America.
15. When in other countries, you sigh about all the official paperwork that needs to be done, since it’s so much easier in Sweden.
16. You answer the phone by saying your first name.
17. You are always apologizing, even if you don’t know why.
18. You insist on sitting outside to have lunch/coffee/beer, wrapped in a blanket (or two!) although it’s only ten-something degrees outside and barely sunny, since it’s finally time for “uteservering”.
19. You wait at least one hour after you’ve eaten before you go swimming. You, being Swedish, might drown otherwise…
20. You expect government institutions to be efficient and quick in dealing with your problems.
21. You’re painfully proud to inform a non-Swede that there actually was an entire week with over 30 degrees Celsius this summer.
22. You know it’s a sin lifting the top layer in the Aladdin chocolate box before it’s empty.
23. You feel bad if you’re not outside on a sunny day.
24. You refuse to believe that snuff or “snus” is harmful.
25. You know Ingmar Bergman is the greatest film director of all time but can’t sit through his films because they’re “too deep,” but you insist to non-Swedes that all Swedes “get” them.
26. You watch an English/American film and get upset that all Swedes are called Inga, Ingrid or Sven when you know these are not common names in Sweden.
27. You find it perfectly normal to exercise by Nordic Walking (“stavgång”), which means taking a walk with two ski sticks and no skis.
28. You can’t stop yourself from boasting about Björn Borg winning Wimbledon five times.
29. You KNOW that someday soon Björn Borg will make his come back… In the same white outfit and headband he wore twenty years ago!