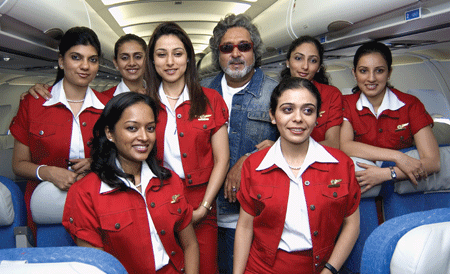 Kingfisher Airlines is close to acquiring a controlling stake in another low-cost carrier SpiceJet.

The deal will value SpiceJet around $300 million dollars. It is likely to be a cash-and- share swap deal.

Mallya is likely to acquire 26% stake in SpiceJet, and make an open offer for an additional 20% stake. He is also likely to retain Spice as the low-cost carrier of Kingfisher Airlines

If the deal goes through, Mallya, through Kingfisher Airlines, Deccan and Spice, will control 40% market share beating Jet (along with Sahara), which has a market share of 33%.

It will also give Mallya the position to dominate fares in the marketplace. Currently, because of the low cost airline fares, Kingfisher and Jet are forced to sell tickets below cost.

SpiceJet is a fairly well run, lean operation with the smallest loss in the industry. Experts say it will give Kingfisher the right product in the low cost space. And, of course, access to trained manpower.

What may not work too well for the two airlines is the fact that they operate different fleets. Spice flies Boeing while Kingfisher is an Airbus customer. So, there are no clear synergies in operations. Analysts say if the two airlines continue to function separately, it will not pose a big challenge for Mallya.

If the deal does fructify, it could change the aviation landscape in the country and make the airline industry more viable.