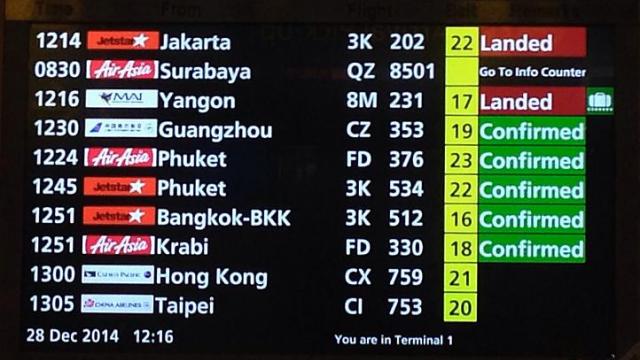 The electronic screen at Terminal 1 arrival hall showing the details of the AirAsia flight QZ8501 bound for Singapore from Surabaya that lost contact. — PHOTO: NEO XIAOBIN

Flight from Surabaya was scheduled to arrive Singapore Changi Airport at 0830H (Singapore time). As advised by the authorities, the aircraft has lost contact with air traffic control.

Changi Airport has set up a Relatives’ Holding Area (RHA) at Terminal 2 to provide assistance to next-of-kin (NOK) of passengers onboard the flight. NOKs are advised to go to the information counter located in the middle of Terminal 2 Arrival Hall (Level 1). Updates will be provided at the RHA to NOKs as and when available.

Indonesia’s transport ministry said there are 155 people on board missing Air Asia Indonesia flight QZ 8501 – 149 Indonesians and six foreigners including one Singaporean.

The other foreigners are one British national, one Malaysian and three Koreans. One of the Korean nationals is an infant, said the ministry.

Indonesia’s Metro TV reported that there were 138 adults, 16 children and one infant. It said the plane had two pilots, four cabin crew and one technical staff.

“Search and rescue operations are in progress and AirAsia is cooperating fully and assisting the rescue service,” said the airline.

AirAsia has established an Emergency Call Centre for family or friends of those who may have been on board the flight. The number is +622 129850801.